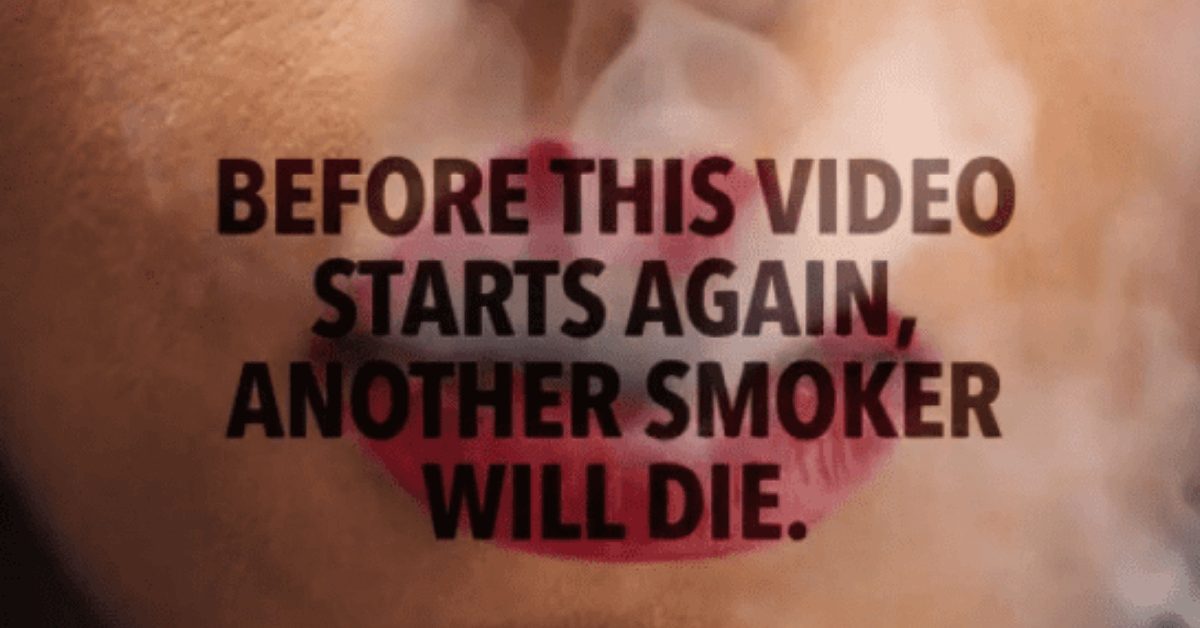 Quit is a non-profit organization that aims to deter children from smoking so when faced with the challenge of creating a campaign for World No Tobacco Day they turned to M&C Saatchi Sydney.

M&C Saatchi wanted to communicate the dangers to Quit’s young demographic in such a way that it would be ‘cool’ to share. Often, the challenge that most health marketers face when advertising the harm of cigarettes is that this young demographic actually like a danger factor in adverts and this can work well in other campaigns.

A pro bono online video campaign using the social network Vine. Vine is particularly driven to a younger audience meaning M & C Saatchi depending on shares to drive awareness of the dangers of smoking.

The rapidity of Vine, with its unique 6-second looping video format, is the perfect medium to communicate the fact that every 6 seconds someone in the world dies from a smoking-related illness.

Glyn McIntosh, QUIT CEO: The fact that someone dies of a smoking-related disease every 6 seconds is shocking – that means 14,400 smokers will die on World No Tobacco Day\’ alone. M&C Saatchi has dramatized it a way that will drive awareness, debate and donations. Ultimately, this highly emotive work will inspire people to quit and help us save lives.In the first five days, the three posts altogether got nearly 50,000 likes and 26,000 revines. While spreading awareness was the campaign’s main goal, some of the shares included a call to action to donate to anti-smoking causes.

Someone Dies of a Smoking-related Disease Every 6 Seconds

The videos are not over dramatic but the sobering facts that are enough to create a memorable and chilling film. Each vine portrays a model representing a different demographic group (the carefree youth, the invincible old timer and the older smoker resigned to their fate) audibly dragging on a cigarette.

Each vine closes with the line, “Before this video starts again, another smoker will die. Hard-hitting and straight to the point.

How Can You Use Vines In Your Campaigns?

This campaign is a great example of how Vine can change initial conceptions within a matter of seconds. At first glance, the campaign’s main image, of a young, attractive woman exhaling smoke from her red-painted lips, might come across as glamorizing smoking. However, with the nature of Vine, as the videos are played over and over, the effect changes. Think about your campaigns, what wrong conception of your brand do your users have? Something you want to challenge or change? Maybe you want to challenge the idea that your brand is only for men or perhaps you want to dispel and negative outlook on your brand.

Previously, at Cancer Research UK, we have been thought of as a colder brand, a team in lab coats, which care about science rather than the people. However, our Every Moment Counts campaign and Race for Life, Cancer We\’re Coming to Get You campaign, helped demonstrate that we’re all about the people and that research is the way that we can fight cancer. Therefore, a Vine is a great medium to challenge misconceptions. However, don’t accuse the users by challenging them. You want to enlighten them.  Similar to the Quit video, use interesting facts to make your video anchored and relevant.

The real challenge is portraying a powerful message in a short amount of time. Don’t get lost in the visual like you could with traditional video, focus on delivering a short and impactful message.

We spoke directly to M & C Saatchi’s Creative Director, Ant Medler, to find out more about the campaign.

Hi Ant! Could you share with us the idea behind this campaign?

We knew that, because of the peer-to-peer nature of social media, for something to work, to take off and spread, it has to be disruptive, different, compelling, engaging. It also has to have that magic ingredient that’s makes it funnier/more shocking/more original than anything else in people\’s feeds. The other essential ingredient is simplicity. Social media by its very nature is quick – from twitter to Facebook to Vine and beyond the platforms are unforgiving of complicated messages and executions. This works well for us: at M&C Saatchi our ethos is Brutal Simplicity of Thought – we believe that it’s harder to make messages simple than complicated, it takes talent and time to boil them down. But when a message is distilled to its simplest form it goes into the audience’s brains quicker and is likely to be remembered for longer.

Taking this thinking into the Every Six Seconds campaign, we believed that if we could launch the right execution at the right time, it could deliver the impact we were looking for. Fortunately we were right. We learned this blend of an engaging idea executed simply can achieve outstanding traction in social media.

Which element of this campaign would re-use in another campaign?

The infamous advertising mad man Howard Gossage once said: People don’t read ads. They read what interests them. Sometimes it’s an ad. I think this principle can be applied to putting marketing and public service messages into social media. Sure, you can stick your client\’s message onto the platforms, but if you don\’t deliver that message in an interesting way, it\’ll just get ignored – just as a consumer would simply turn the page on a dull press ad or tune out a boring radio ad.

QUIT has an essentially important message to get out there, facts and information which can positively impact the world. On platforms like Twitter and Vine, users are sharing their passions, passing on things that move and inspire them. So if we were doing the campaign again, we\’d use Vine again as it\’s the perfect platform for people to pick up simple, socially informed messages and pass them on. The fact that the campaign achieved over 200, 000 likes and and ReVines is proof of this. And putting Vines at the center of the campaign than spreading them across Facebook and Twitter worked very well, with high engagement across all platforms.

How did QUIT react to your team\’s creation?

Our client was over the moon with the work and the response to it. QUIT is an independent charity that has to work with minimal budgets to get their message out, engage people, drive awareness of the dangers of smoking and remind people of their important work educating kids, corporates and ethnic minorities about the dangers of smoking. Without a huge budget to carpet bomb mainstream media, it was still important to launch a campaign around the World Health Organization\’s No Tobacco Day.

To drive such phenomenal engagement on social media plus such a huge response in the mainstream media (national press and TV coverage, coverage on websites and blogs globally) is a massive win for them. Every piece about the campaign on and offline is another audience reached with their message.

This revolutionized marketing campaigns for companies, especially non-profit ones to convey that Vine can be a great medium for health messages and for summarizing a message in an effective way.

Don’t think that a medium won’t be taken seriously just because it’s new. Get vining!