The Walking Dead’s Guide to Survival for Marketers 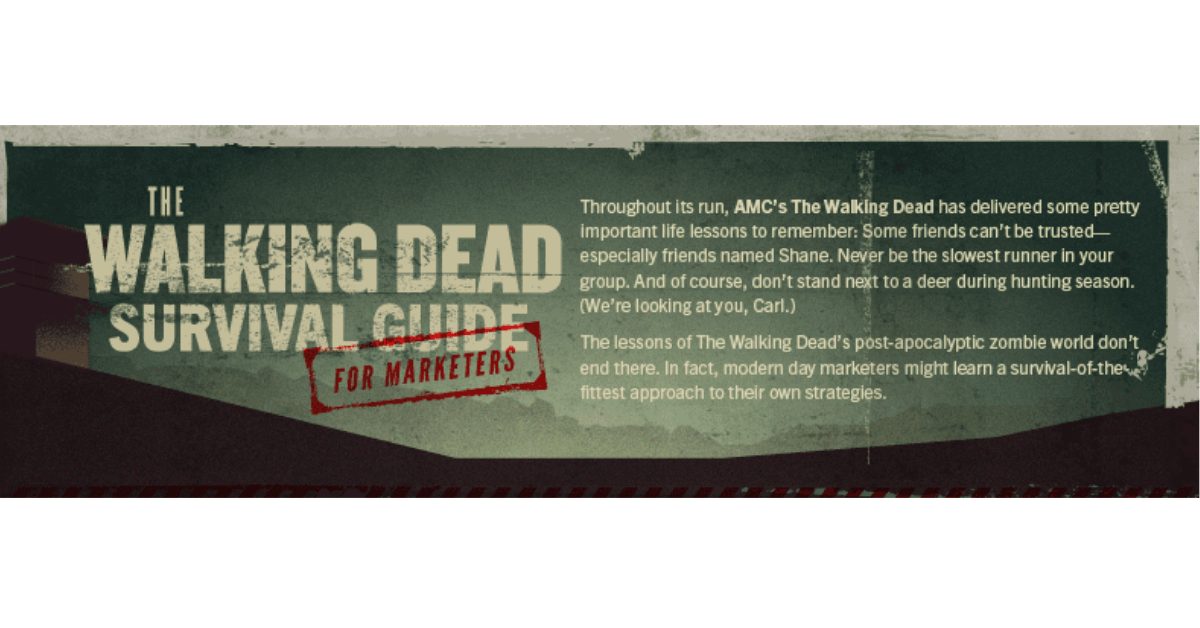 The Walking Dead is a Golden Globe winning American series that looks at a post-apocalyptic world where survivors battle flesh-eating zombies. Before you raise your eyebrows at the questionable taste of the 12 million people who tune into the show, here’s how it’s revolutionizing social television, marketing campaigns and exemplifying how to last in tough markets.

The Walking dead’s social strategy to promote itself involves:

They have over 20 million fans on Facebook who they constantly stay in touch with. They have an active team that constantly retweets what their 9 million followers have to say. They also let fans provide insights and participate in their extended segment.

So, what’s their secret? Their strategy involves creating light, funny, interesting, and easy to share content.  Case in point, a video that went viral which asked “Could Zombies live among us?” They know that when social media is used correctly, your fans become your marketers. So, how do you ape the success of The Walking Dead to become a smarter marketer?

Do you know that awesome marketing campaign started by that company where people had no clue what they were doing and it became a roaring success?

We don’t either. If you don’t know in which direction you are heading, you wouldn’t know what to do when the zombies (aka competition) comes calling. Taking out time to design a plan ensures that everyone’s on the same page and it’s easier to understand what went wrong and where.

The Walking Dead has an amazing strategy of being where you are. Hard to believe? They position themselves in such a way to attract maximum attention – online and offline.  They know what your peak internet usage hours are. They know how long you are likely to linger in front of your television set. People won’t bother with your posts unless it hits them when they are in the right mind frame. Bad timing will pull you down faster than a zombie bite.

Risks Will Make More Often Than They Break

The only way to be different is to be different. The Walking Dead walks into your life via zombie invasions and invading events like the ComicCon. You can populate Twitter, Facebook and Instagram but the truth is that it’s saturated. Any attention you get there is going to be short-term. Get out and reach people through a different route. For example, CDC launched an emergency preparedness kit in the form of a graphic novel known as The Zombie Apocalypse Survival Guide that got thousands of downloads.

No One Wins Alone

Like a zombie search, every marketing campaign needs a leader whose vision and intuition leads the group forward. In The Walking Dead, that’s Rick. However, focusing overly on leadership and power will disrupt your group and create rifts. That is what happens when Shane, Rick’s deputy gets jealous. Minimise egos on your team by ensuring that everyone does a specific job and they do what they are best at.

You Are Surrounded by Danger

The only sin bigger than ignoring your customers is ignoring your immediate surroundings.bThe competitor is closer than you think. If you do not adapt to the changing surroundings soon, you might not last that long. Remember, there is nothing worse than dying at the hands of a zombie. Manipulate your surroundings as a marketer before they kill you.