The Opposite Day Interview With Steve Spicer! 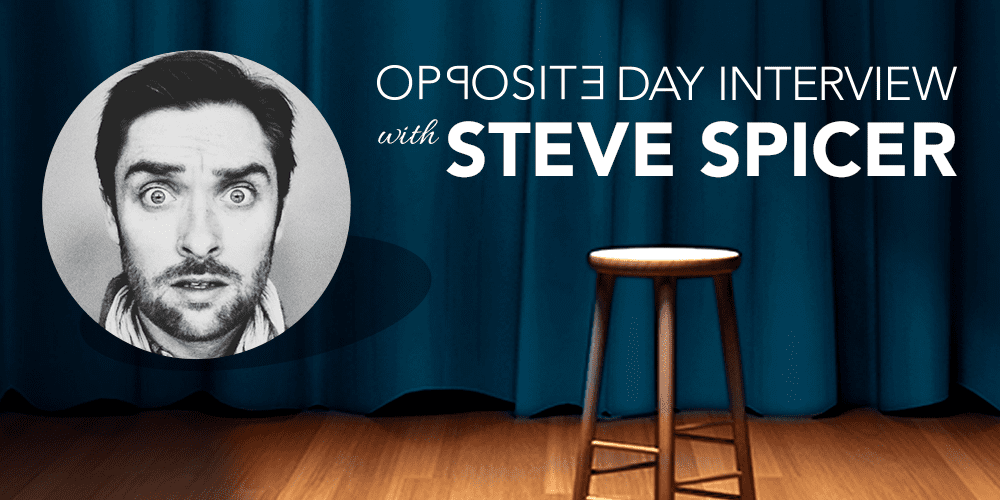 January 25, in the lives of amazing people like you and me, has been reserved for Opposite Day. For those without common sense, here’s an explanation of the day. You may or may have not seen Opposite Day being observed in the popular sitcom Seinfeld – so it’s not something that the internet made up on a lazy Tuesday afternoon.

For Opposite Day, I decided to get in touch with Steve Spicer, an all-round brilliant guy who has handled social media for some very high profile individuals such as Derren Brown and Peter Serafinowicz.

He’s a Social Media Marketing professional, who works primarily with brands and businesses in the entertainment sector. Having been at this now for close to five years, he’s considered to be something of a Social Media veteran, causing many people to wonder, ‘How is he still here?’

I decided to ask him questions around how he handles social media and digital marketing, and he gracefully answered.

Avtar: Steve! It’s 2014! Are you happy?
Steve: Hi Avtar, can I be honest with you right up front? I’m not happy. Seriously. Social Media has completely failed to live up to everyone’s expectations and, excruciatingly, is still here. It’s still thriving and it is still a hot topic, despite the very best efforts of people like me to exhaust its gimmicky engines over the past 18-24 months.
Avtar: I agree, not even sure why we\’re bothering with this any more. Regardless, what changes have you brought about to your social media strategy as part of your social resolutions?
Steve: Social Resolutions? We do those now? Okay, so off the top of my head, I’ve resolved to really plough a lot more energy into more frequent and more text-heavy updates. If I know one thing for certain, it’s that people are getting sick to death of colourful, entertaining content and long for the simplicity of getting comfy with an e-reader to get stuck into some meaty, well-researched long-form articles that can take up the best part of an afternoon to read.
Avtar: On that note, let’s make sure we throw in numbers in this interview and make this absolutely massive! Which platform drives the least amount of engagement for brands that you manage and why?
Steve: From where I’m sitting, ever since they got rid of the Fail Whale, Twitter has really struggled to regain any of the start-up swagger that was on show back in 2007 at SXSW.
Users of the platform are struggling to keep up with the speed of their own updates, tiring of the endless exposure to socio-political activism, and are growing deeply resentful toward the constant interruption to their favourite television programmes to read what other people are writing about those same shows.
Add to that the swelling army of celebrities who are cutting out their publicists and managers to engage their audiences with unfiltered honesty, I mean – who wants that!?
Avtar: To hell with Twitter. I’ve heard MySpace is the in-thing now. What tips do you have for social media managers looking to master Twitter though?
Steve:
I cannot overstate how important it is to ignore what everyone else is saying and to find your own focus to the exclusion of all other stimuli. Literally – ignore everyone. Don’t fall into the trap of trying to mollify your audience by attempting to engage them in any kind of meaningful dialogue. The numbers are simply against you from the get-go. It is impossible to hold a conversation with everyone who follows an account, or Page or whatever so don’t even try. Speak and they will listen. If they like, they can always leave a message.
Avtar: Not like social media is for engagement with fans anyway, there are 1-800 numbers for that. Good analysis, Steve. Tell me though, when you hit a wall and can\’t think of any further ideas for content for the pages you manage, how do you come up with ideas?
Steve: I’m a big believer in the old adage that the only way to go forward is to first go back, so when I hit The Wall, I go back and look at what ideas were working well in, say, 2010 and just rehash those as best I can. Seriously, if the wheel wasn’t wobbling then, there is no need to stop and change it. Failing that I just steal. Copy-paste is how we spell ‘homage’ these days.

The perils of running multiple Twitter accounts mean I’m constantly asking Wait, am I me? before tweeting…

Avtar: You and me both! So, what are the key ingredients that make a marketing campaign successful on social media?

Steve: In my experience there is really only one ingredient – and that is advertising. As a society of consumers, we’ve grown up watching ads, reading ads, gazing up at ads on billboards, listening to ads between songs on commercially funded radio stations. The conditioning is already in place, so the only way to truly guarantee a successful marketing campaign across the new frontier of the Social web is to simply cover it with ads – in the margins, in the messages, everywhere: just like in the real world. Wherever the eye goes, the money flows.
Avtar: Just this morning I clicked 29 ads! Loved every second, such a rush. In closing, what’s the golden piece of advice you’d like to give marketers for 2014?
Steve: Slow down. Things aren’t that different now to how they were ten years ago. There’s a lot of hubbub around innovation and ingenuity, and the stress caused you to try to figure out what either of those words means and applying them to your practice can put you in hospital. So relax. Marketing is still marketing, it just happens to have got so much easier – you can put an unpaid intern in charge of your company’s Social account, and the selling will take care of itself.
So there you have it guys! Focus on long, drawn out, research heavy content with simple graphics (if any at all), don’t respond to your fans immediately, focus on spending at least $5,000 on advertising for each of your campaigns and if you’re ever in doubt, flip back to 1995 and see what kind of campaigns worked then.
Got any questions you’d like Steve to answer? You can tweet to him at @BunchOfSteve,  or follow his antics on Instagram!