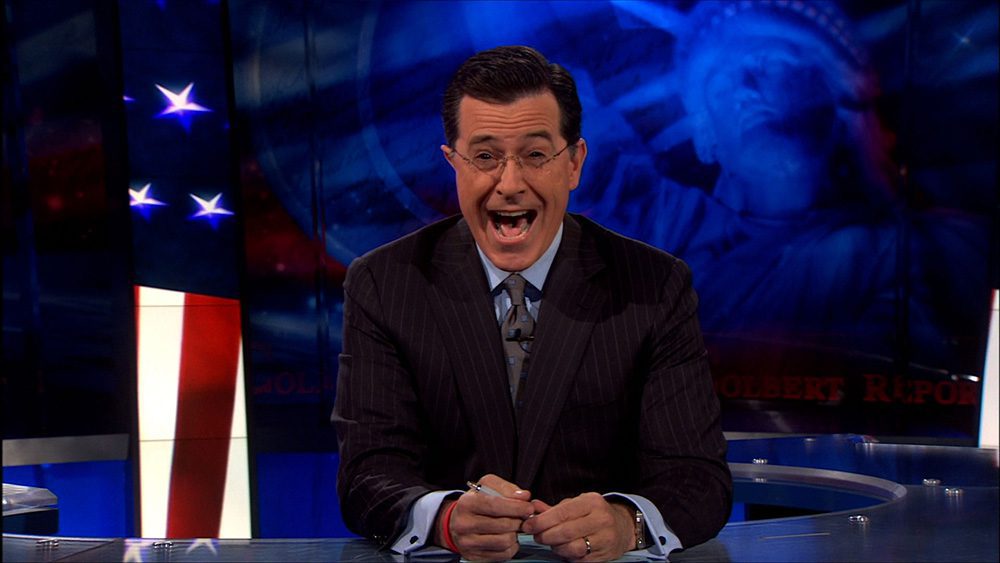 Stephen Colbert is an American comedian, television host and actor who hosts Comedy Central’s hit satire The Colbert Report. Mocking the news world has not just made Colbert a household name but also won him an Emmy and put him among Time Magazine’s 100 most influential people.

The Colbert Report has become an internet phenomenon with fans posting all over about it. It has millions of followers on Twitter and Facebook – making it one of the most successful television shows on social media. But howe does he do it?

Some would say the reason for his success is his ability to blend in platforms simultaneously. Colbert built his fan following on Facebook and Twitter and now steadily cross-promotes content. He’s  even made fun of Twitter’s money making model comparing it to Jesus Christ saying that they both made the same amount of cash and liked short commandments.

Ironically, he received the first Golden Tweet Award from Biz Stone for having the most re-tweeted tweet. This hi-profile tweet was retweeted 44,000 times or by 2.3% of his followers and focused on a trending topic, the British Petroleum Oil Spill, and Colbert used his trademark humour to get the message across.

One can argue that Colbert being a celebrity has it easier than the rest of us, but his social media strategy doesn’t involve putting selfies for fans but thought-provoking, heart-warming content. Say for example, his take on SnapChat, the popular photo-messaging app which sees and deletes 100 million photos every day:

Is starting an app now in college like the old version of starting a band? @Snapchat

He’s also taken jabs at Bitcoin commenting on its shady nature and joking that, “How does this unregulated, imaginary currency invented by an anonymous hacker, backed by the full faith and credit of YouTube comments ever go wrong?\”

Colbert doesn’t simply talk about Obamacare and Mitt Romney on his social media channels, he casts his net far and wide – providing commentary on what social media wants to hear. His humor of course, is not something that can be easily matched by us, normal mortal social media managers, but we should put in a slight effort. Maybe.

Here are some tips to maneuver your social media strategy based on his:

Stephen Colbert advises that a brilliant strategy is to discomfort people. He says, Just associate your product with a divisive political position and just wait for the cash to roll in.

It’s however, also important to ensure that these controversies are addressed in the right manner by your brand, and racially or culturally sensitive topics should be avoided at all costs. Quick banter on a celebrity (except a stand-up comedian) is acceptable, such as the #BetterBatmanThanAffleck episode.

Decide Who You Want to Be

Stephen Colbert’s always satirical even if he is not picking up on political segments. He’s built a persona for himself and he cannily uses the reach of social media to reinforce that perception. He lashed Nissan in a segment which Nissan then converted into a positive PR opportunity. He still stuck to what he best does. There’s no point eating your words or deleting your posts.

Your organization might not have something going on 24*7 but there’s always something happening in the world. Capitalise on it. Stephen Colbert takes on advertisements like a sappy Cheerios ad when he doesn’t want to talk democrats and republicans.

Humour is the sharpest weapon in your hands. Jump on trends and get people to laugh along with you. Stephen Colbert has a huge fan following not just because he is a celebrity but because he creates entertaining content. Remember, no one likes to get bored and everyone likes a laugh. Especially on social media, which is an escape from the real world for all your fans.

And as Colbert would say, “That’s it for now, everybody. Good night.”