Imgur Imprints on the Internet! 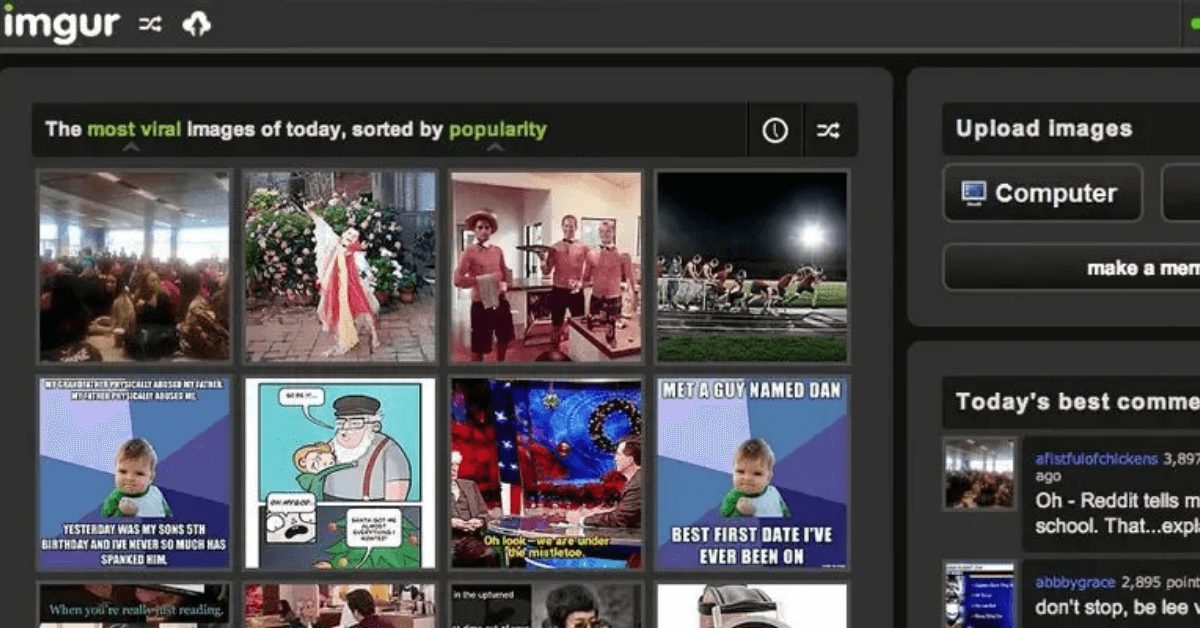 Like any good entrepreneurial story, Imgur’s too was birthed in a university dorm room, when ardent Redditor and Ohio University student- Alan Schaaf, decided that the Internet was lacking in something pretty massive. In his own famous words, “An image hosting service that doesn’t suck.” So, he went about creating a platform that addressed exactly this issue… mainly to benefit Reddit users.

So, what is Imgur? It is to images what YouTube is to videos. Simply put: it’s a mish-mash of the web’s most popular image content, all under one roof. The site offers free image hosting to users and allows them to upload images, make albums and create their own accounts and manage images. Most importantly, it boasts a Meme Generator feature. (Imgurians are creating more than 100,000 memes per month.) The site’s public gallery is a hot assortment of the most viral images on the Internet.

How popular is Imgur? Well, absolutely everyone’s talking about it! But, if that’s not a good enough method to gauge its popularity, all you have to do is look at the numbers. Sometime in September this year, this meme-heavy site hit the 100 million (now 120 million, with 4.5 billion page views) unique monthly visitor mark. Currently, the image hosting service is home to a whopping 650 million images and approximately 1 million images are uploaded every day.

What’s more, it claims that more than a quarter of its traffic is direct. Its latest mobile app accounts for about 35 percent of traffic. Only naturally, advertisers are looking very keenly at this profitable start-up. Sometime back, the COO of the company- Matt Strader, revealed that among their advertisers are heavyweights such as Paramount, GE, Virgin, and Sony Playstation.

Imgur: the next big social network?

The platform, in recent months, has been exploring its more social side. Its chat facility allows its young community to interact in real time- one in many small steps in shifting from being an image host-to-user community to a public destination. Interestingly, it has been noted that the site’s young community even has a distinct personality now, replete with lingo et al. People flocking this service aren’t looking to connect with old pals and family, like on Facebook. Therefore, there is a lot less ‘peer pressure’.

Imgur is in direct competition with sites like Min.us, PhotoBucket and TinyPic. But, the founder is very clear that the company has no intentions of following in the footsteps of Flickr and Instagram, in so much that its images aren’t merely ones that come from a camera…they could be screenshots, something photoshopped, or even a gif. (While on gifs, there’s talk that the site is developing a gif generator tool.)

In a few short years, Imgur has built for itself a vibrant community that is very similar to that of Reddit’s, having undergone change that have made it resemble the latter more than ever before. Take for instance the new reputation system through which Imgurians can gain points for submitting good content and comments. There is proof that users are now treatingImgur as a destination now, as opposed to merely an image host. Reddit has almost become an alternative- a far less vibrant alternative, according to many.

But, the two sites insist that they have always had a mutually beneficial relationship. Why? Because, if people stop submitting Imgur links to Reddit, the Imgur gallery loses value. Besides, a large chunk of Imgur’s traffic still comes from Reddit.