I spend a lot of time on LinkedIn. I’m careful about the kind of people that I connect with, and as a result I’m exposed to some really interesting discussions and viewpoints – something that I find hard to come across on Facebook. Especially if it’s anything related to the industry I work in.

Over the course of the last couple of months, I stumbled across a number of people who were Community Managers and Social Media Managers. When going through their job description – I noticed that they have very similar… roles? They both described themselves as the voice of their brand, as manning social communities and so on and so forth.

The most common misconception is that there are more similarities than differences between Community Managers and Social Media Managers. From a distance, they might seem similar in more ways than one because of a host of over-lapping duties, or what they’re expected to do. Most people think that they do the same thing but just have different titles. But the truth is that the treatment and expectation from a Community Manager and a Social Media Manager should be very different.

Hootsuite knows the difference. Do you?

The most significant role in this context lies at the hands of businesses hiring these individuals.  Just like one would not expect an eye surgeon to treat a neurological disorder, considering both are doctors the same situation defines the role of a Social Media Manager and Community Manager. Whether your company has a B2B approach or a B2C approach would clearly define the difference.

Lucie Snape, Head of Social at Vodafone Australia told us, “The biggest difference in my opinion is that a Social Media Manager should have a strategic view. The Social Media Manager sets the strategic direction and the Community Manager implements through tactical execution, namely, effective content creation and delivery, and ongoing community engagement and growth”

So What Are The Differences Between Community Managers and Social Media Managers?

We dwelled into this ‘thin-line’ approach and did some hardcore research by interviewing tons of Community and Social Media Managers. LinkedIn was very helpful at providing a breakdown in their responsibilities as well. Our results have led to the creation of this infographic (What?! Another damn infographic?!) to felt differentiate the roles of a Community Manager and a Social Media Manager. 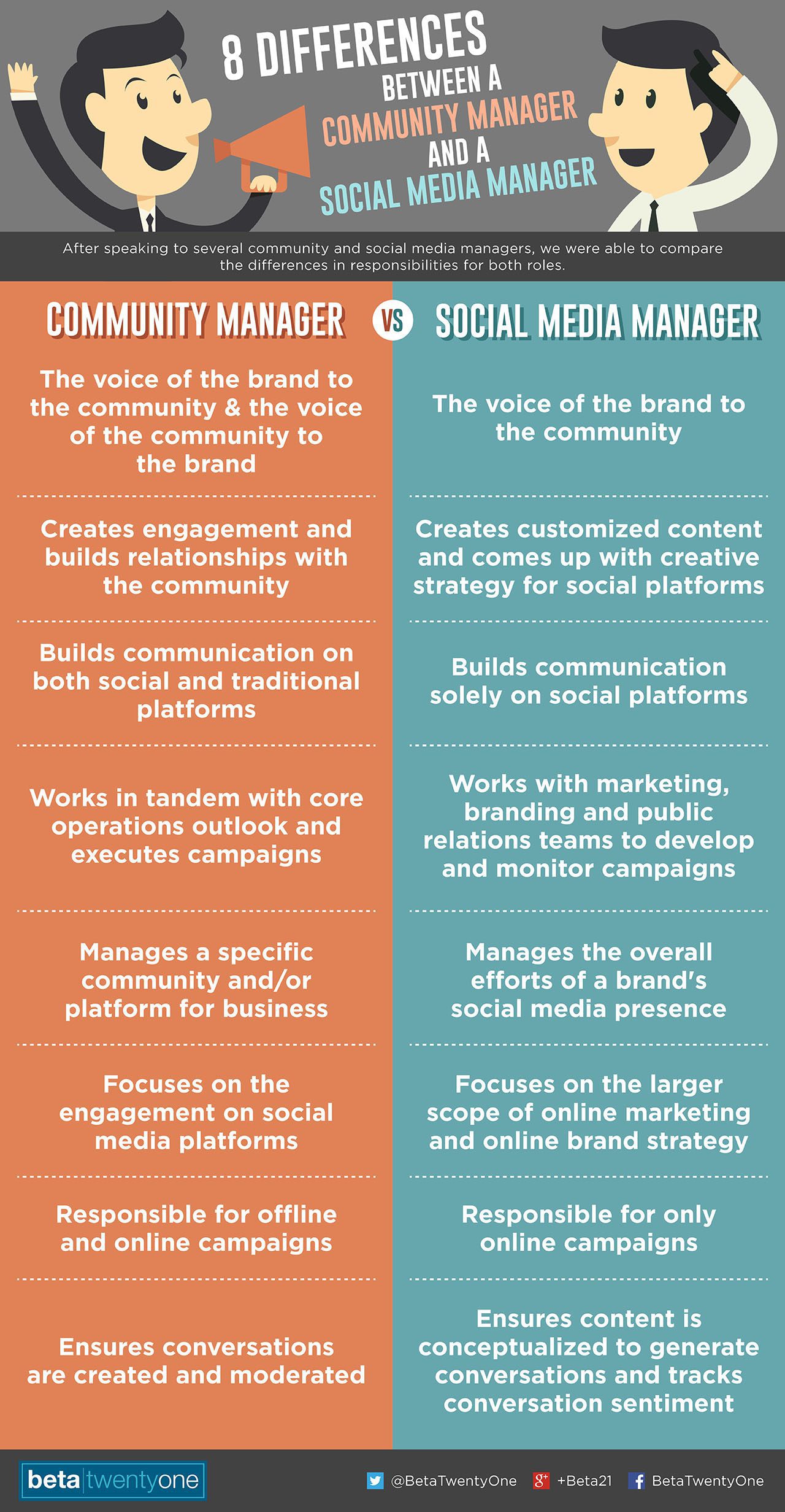 Not everyone will agree. And we know that. We’d love to hear what you think. There are probably TONS of one-man social media teams out there handling everything and anything for a brand online. Tell us what you think! Is there a much bigger difference that we’re missing out on? Are there a lot less differences and we’re just playing it up? Should there just be one role?

Here’s that line which points you to the comments and asks you to share your views. Because you know, engagement. But seriously, do it. Share an idea, spread a thought!